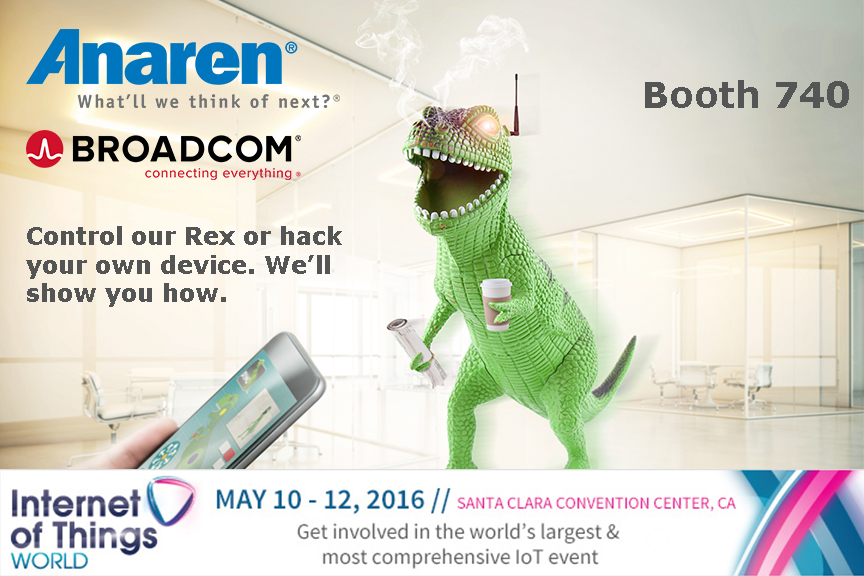 Anaren Inc.’s progress with its new products in 2016 have been followed with excitement – from first announcements at CES 2016, to the crowd pleasing Dino demo at Embedded World. Now, IoT World 2016 is your chance to see these unique capabilities in action! The hands-on opportunities at Anaren’s booth will feature the company’s latest “add a control panel” wireless robo-hacks and let attendees experience the newest products before they hit the market in early summer.

The company also returns as a sponsor of the IoT World Hackathon. Anaren’s resident “hackspert,” Mihir Dani, who mentored all teams in 2015 and took 2nd, 3rd, 4th and 5th place in last year’s Hackathon will be there, as well as the 2015 Hackathon winner who used Anaren’s Atmosphere development platform and MSDK on his way to clinching the 1 st place finish (NOTE: The 2015 winner finally deployed a solution using Wi-Fi that had previously won other Hackathon events). As in 2015, Anaren will be giving away its dev kits to all participants in the Hackathon