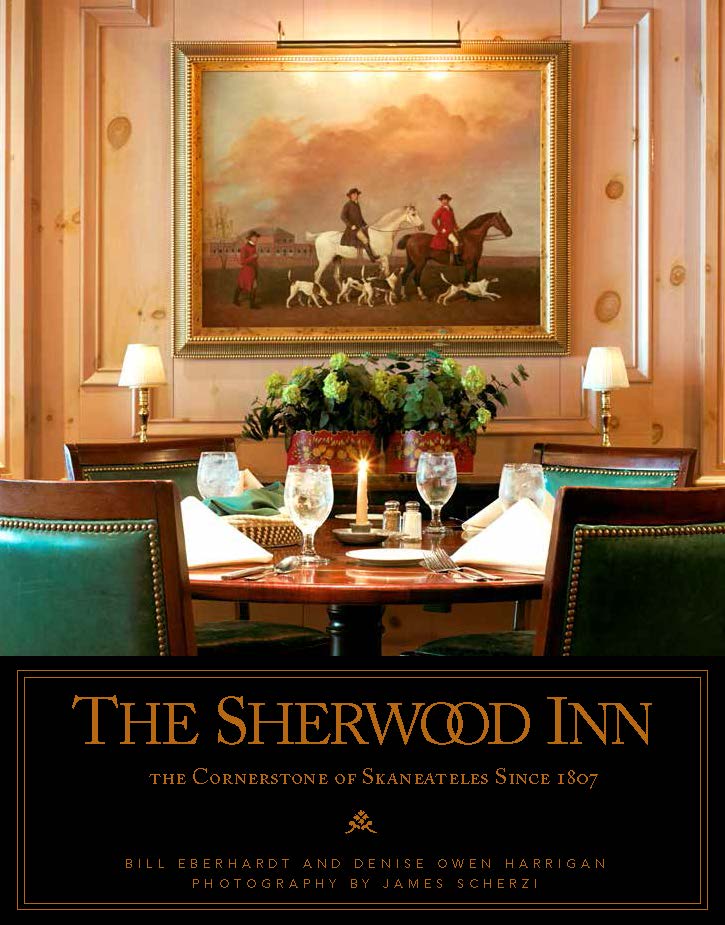 A History and Cookbook from The Sherwood Inn will be released on November 23, 2014. The book, co-authored by the Sherwood’s owner Bill Eberhardt, takes a look back at the 200+ year history of this landmark in the beautiful Finger Lakes region of New York through stories and images, along with many of the popular recipes from the executive chefs in the Sherwood’s dining room.

The release of this book also celebrates the Sherwood Inn’s 40th Anniversary under Bill Eberhardt’s care, and the tremendous impact this establishment has had on the Skaneateles community.

In 1974, Bill Eberhardt – a 33-year-old Skaneateles resident with restaurant experience and a young family – took a bold step and purchased the Sherwood Inn. His vision was to return the inn to its original mission of providing rest and refreshment for travelers and a meeting place for the community.

Within a few months, Eberhardt reopened the restaurant and tackled the long-delayed repairs. He restored the abandoned guest rooms with authentic antiques and original art. Soon the Sherwood Inn was recognized in national publications like Country Inns and Back Roads, Bon Appetit, Country Living, Country Home, Harper’s Bazaar, The New York Times, Travel and Leisure, and New York magazine.

In the past 40 years, the number of chefs has grown from two to 26. And the number of guests served at a single event – such as Mother’s Day Brunch – has soared to more than a thousand.

In 2007, the Sherwood Inn celebrated its 200th anniversary. And now, in 2014, the inn – more vital and beloved than ever – celebrates its 40th anniversary under Eberhardt’s care with this History and Cookbook.