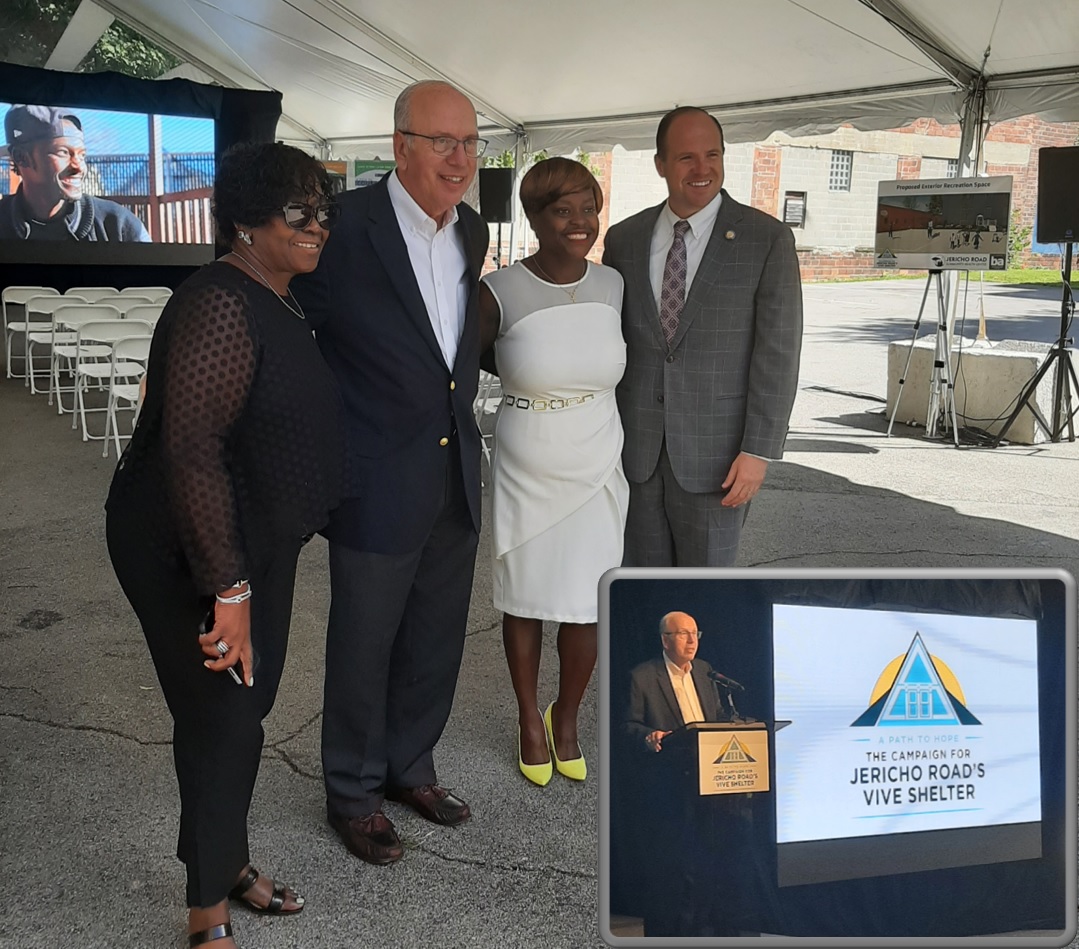 Vive Shelter, a program of Jericho Road Community Health Center, publicly launched its capital campaign A Path to Hope: The Campaign For Jericho Road’s Vive Shelter with the announcement that more than $3.3 million is committed toward its $6 million goal. This is the most ambitious fundraising effort in the organization’s history.

The new location will be the future home of the Scott Bieler Foundation Vive Shelter, A Program of Jericho Road. As the largest Asylum seeking shelter in the United States, Vive will continue its long standing history of providing safe refuge for those fleeing persecution and other desperate conditions from across the world.

“Vive has been part of more than 100,000 journeys to safety since its founding in 1984,” said Dr. Myron Glick, founder and CEO for Jericho Road. “Today, our community comes together in its commitment to build a new home for Vive to ensure this warm and welcoming refuge continues to serve our neighbors from all over the world, for many years to come.”

“The support of over 20 gifts to A Path to Hope: The Campaign For Jericho Road’s Vive Shelter made by local foundations, individual donors, church partners, community leaders, board members, volunteers and staff during the silent phase of the campaign was vital to our being able to announce such a significant total to date,” said Magdalena Nichols, Chief Operating Officer, Jericho Road Community Health Center.

Jericho Road also announced a Community Challenge to raise an additional $60,000. Five community members have pledged to match up to $30,000 in donations received by December 31, 2022.

“We are incredibly grateful for those who have invested in this project to date. The impact is remarkable and tangible as we change the trajectory of the lives of those who seek asylum in our city, town, and community,” said Scott Bieler, campaign co-chairperson.

A Path to Hope: The Campaign For Jericho Road’s Vive Shelter that funded the spring 2022 purchase of 1500 Main Street, will fund property renovations, create a current use fund for immediate operational needs and endowment for the programs sustainability, has been gaining momentum since 2020 raising over 53% of its goal despite challenges presented by the COVID pandemic. Community philanthropist and entrepreneur Scott Bieler emerged as a lead donor to the initiative after forming a relationship with CEO Dr. Glick and becoming inspired to help make the new space possible. Alongside Scott, generosity has been tremendous including support from M&T Bank Charitable Foundation, Independent Health, Lawley Insurance, Rich Family Foundation, Youth Time Foundation, Paul A. Safrin Foundation, Peter & Elizabeth Tower Foundation and some individual donors who have been and continue to be faithful to the work of Jericho Road and Vive.

Needing a more conducive and trauma-informed space to meet the ongoing needs served by Vive, the new 1500 Main Street property will undergo renovations to create a more efficient infrastructure to meet that need. The new building which is larger than the existing building on Wyoming Street, will create a safer, more comfortable and dignified environment that promotes healing for residents. The new building will include:

Jericho road plans to complete renovations by the end of the year and move Vive’s operations to 1500 Main Street in Spring of 2023. For more information about the campaign and to donation to the Community Challenge visit vive.jrchc.org.